Here’s another question that gets asked of us on occasion:

Curve2 has an amazingly useful feature called the Run-To-Run tab. This tab only shows up when you have a subsequent run that is set to be based on the previous run. Under these conditions, the Run to Run tab magically shows up under the Analysis section. This Run-To-Run comparison makes use of the 100% patches in the P2P target which should not change significantly from one run to another. Each P2P has these patches, but the various changes you make in the RIP’s control points will not have an effect on these. The RIP’s curves always start at zero, and they always end at 100, 100, 100, 100 (CMYK).

Depending on the stability of your measurement device, you might expect to see delta E values of less than 1.0 for stable printers, but values of 2 - 3 or more for presses that are not printing consistently. How can you know how much your measurement device contributes to this? We also include a “Paper dE” calculation. This is comparing the duplicate paper white patches in the P2P target which should not have much of any ink in them. Assuming that your paper color is consistent, any number you see here would be telling you how much of a measurement variation you got between the two runs. This can give you a rough ‘real-world’ margin of error for your measurement instrument. This is useful information to know for all of the color measurements you make with this instrument, not just the Curve2 measurements.

In this example below, Cyan and Black inks are holding steady from the first run to the second, but the Magenta and Yellow (at 3.75 and 2.72) have had something change in the press run. 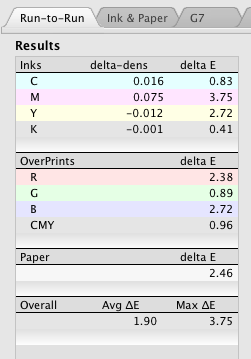 Considering that the paper dE is up around dE 2.46, it might be that the measurement instrument is suspect, but that alone would probably not account for the problems in Magenta and Yellow. You would want to look to press inconsistency as well.

Any time you are dealing with multiple runs, do check the Run-to-run tab. Presses are such fluctuating beasts, that you want to account for changes in the press itself - and know the variation in your measurement instrument - before you start suspecting the software.

What a helpful tool! Can’t wait to get my hands on this software!