I just installed and tested a ColorCast profile with version 3 of ColorThink with ColorCast. As I had done before with v3.03, I made the new CC profile using GRACol as the proofing profile and our standard proofing printer profile for use with the ColorBurst RIP in the Device Profile area. As you suggested, a proof which was printed from PhotoShop using the CC profile from v3 did not have the overall background density as the proof did which was printed using a CC profile generated in v3.03. In Profile Inspector of v3, the neutrals and Chroma were almost consistently at or near zero whereas the same profile generated by v3.03 showed the neutrals at nearly -2 in that version.

I noticed a couple of issues after generating the profile in v3. When it was finished creating the CC profile and I went to view it, I got a message stating the following: “Error using display profile, sRGB will be used instead.” I had not chosen to include any RGB profile. So, I’m not sure where this came from or what it is referring to. Was it just referring to an inability to access my monitor profile for viewing the results in Profile Inspector?

Also, the profile inspector of version 3 reads the neutrals of both profiles very differently from version 3.03. In both cases, the CC profile made with version 3 fares better. But, the latter version shows much more neutral and chroma deviation from the central L* standard than version 3. Is this also due to the bug in version 3.03? I’m confused as to which version to trust.

Ah, that’s right. I forgot about that sRGB message. That 3.0 version I’m recommending you use does not have the updates for newer operating systems that our newer versions have. This issue came up when Snow Leopard first came out. You can read all about it in this thread:
[one.imports.literateforums.com/t/10-6-and-the-colorsyncscripting-app/741/1)

Like it says, it does not affect the functionality of creating CC profiles, it will only affect how colors look on the screen while in ColorThink.

So for making the ColorCast profiles, you should use version 3.0.
For everything else, like viewing neutral rendering in the Profile Inspector, you should use the latest version (as of now that’s v. 3.0.3.) If version 3.0.3 is showing more variation from the L*, then so be it. It is surely more accurate than the 3.0 version. We’ve made a lot of changes since then. As I have duplicated your setup here, I find that the 3.0 version of the Profile Inspector is showing me the neutral line going all the way to 100%, even though the white point tab gives a lower white point. So something’s not right there. 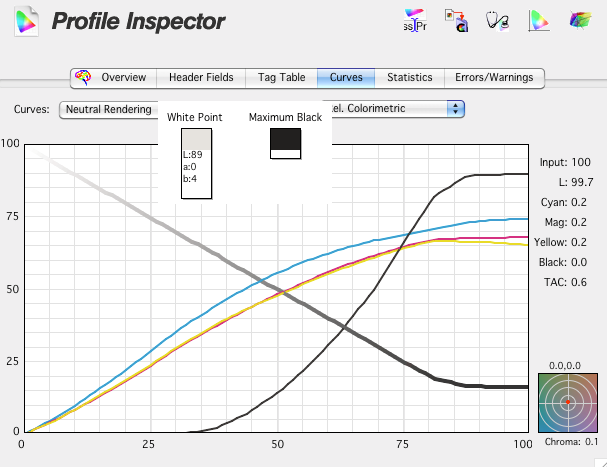 Thanks very much, Pat.