DTP94 or Colormunki for monitor calibration?

I have encountered a subtle issue when calibrating my Eizo CG21 with ColorNavigator. The software supports both my X-Rite DTP94 (Monaco Optix XR) and Colormunki Photo, so I can use both to calibrate/profile with the same target settings.

I find that the Colormunki gives noticeably cooler results than the DTP94, for the same target color temperature. I get a pretty close match when I select 6000K (DTP94) versus 5700K (Colormunki).

When I validate the DTP94 6000K profile with the DTP94 I get an average error of 0.7 (max 2.7) dE, and 1.4 (max 2.8) dE when the Colormunki is used. Conversely, validating the Colormunki 5700K profile with itself gives 0.7 (max 2.1) dE and using the DTP94 I get 1.6 (max 2.9) dE. The maximum values are always for a blue cast on the black patch - the biggest weakness of this monitor. For cross-validation results, the white patch is a close second due to the white balance shift.

Obviously, the two devices use different technology (colorimeter vs spectrophotometer), but I was expecting at least the color temperature readings to be close to one another. Can anyone shed any light on why I’m seeing such a difference? Also, which of the two is more accurate for my monitor? I have the DTP94 for 6 years now, and the Colormunki for 3 years.

We wrote an article in one of our newsletters awhile back that talks about the difference between colorimeters and spectrophotometers. This might shed a little light on the subject:
colorwiki.com/wiki/Profiling … r_Monitors

While they are both quality devices, they are designed for bringing you back to a consistent calibration point rather than a precisely accurate color. So I guess I’m not surprised that the same color is reported being 300 Kelvin off on the different devices. I would tend to trust the DTP94 more. It’s a very good device for normal-gamut monitors like your CG21 (not so good for wide-gamut displays.) As I recall, it also has some kind of ambient temperature compensating circuitry built into it, similar to what the DISCUS does (DISCUS Temperature Compensation)

Thanks for your response. It’s good to get a perspective from someone who is familiar with a large range of monitors and calibrators.

I hadn’t thought of the difference in shadow noise before, but it certainly makes sense, and it’s intriguing to see the numbers in the DISCUS review.

I’ll stick to the DTP94 for now, and if/when I upgrade my main monitor I’ll probably get one with a matched sensor.

wondering what would be my best option…

Your DTP94 on a Cinema display might be a problem. The DTP94 was designed before the days of LCD-backlit displays, so it is suspected that that technology will not measure that form of light source accurately. Normally we would recommend that people get a Spyder 3 or a new i1Display Pro for an LCD display like this.

Are you saying that you’ve tried the basICColor software and are still not getting good results?

If you’re talking about the ColorMunki spectrophotometer, that would work too, but tends to lack somewhat with blacks and shadow details, and it might be more than you need if you don’t need printer profiles.

@Patrick
Thank Patrick for your comment…
I was on the impression that Apple LED Cinema Display 27 was NOT a wide Gamut monitor !

And yes i have tried BasicColor and result was just ok…

It’s not a wide gamut monitor in the sense that it would emulate anything close to Adobe RGB, but it would have a gamut larger than sRGB. Email me a profile and I’ll take a look at it in ColorThink & send you a screenshot. From what I understand, it’s mostly the LCD light source that makes it difficult to get an accurate measurement for these older instruments.

Redline sent me an image and his monitor profile, and I have brought them into ColorThink Pro for diagnosis.

But if we look closely at the pixels of your sRGB image, we see that a whole row of dark reds which are right along that red border of sRGB, are outside of the gamut of your monitor. (See second image, below.) This might explain why you’re not getting all the dark red shadows and browns on your screen that you can see on your prints. Is that the issue you’re having? The DTP94 does a great job of measuring darks and shadows. The new i1 Display Pro or the ColorMunki display would probably give you slightly better results and at the same time handle the LCD light source better. Or you could get a DISCUS! 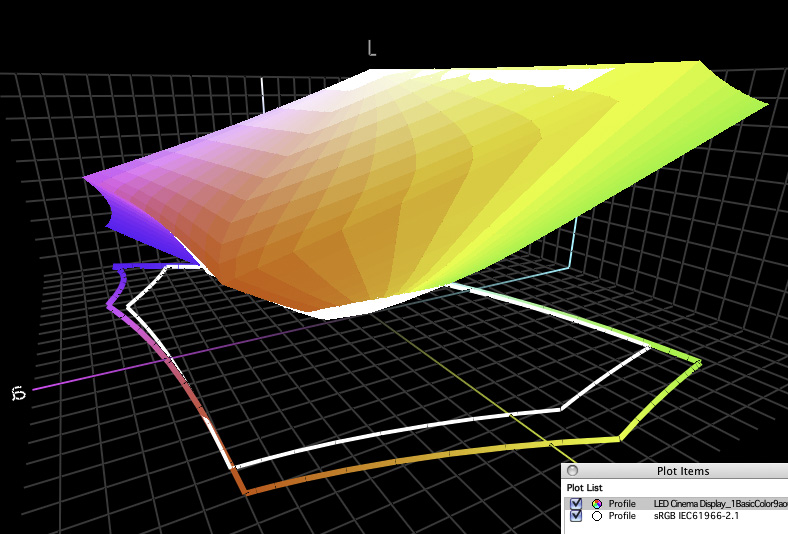 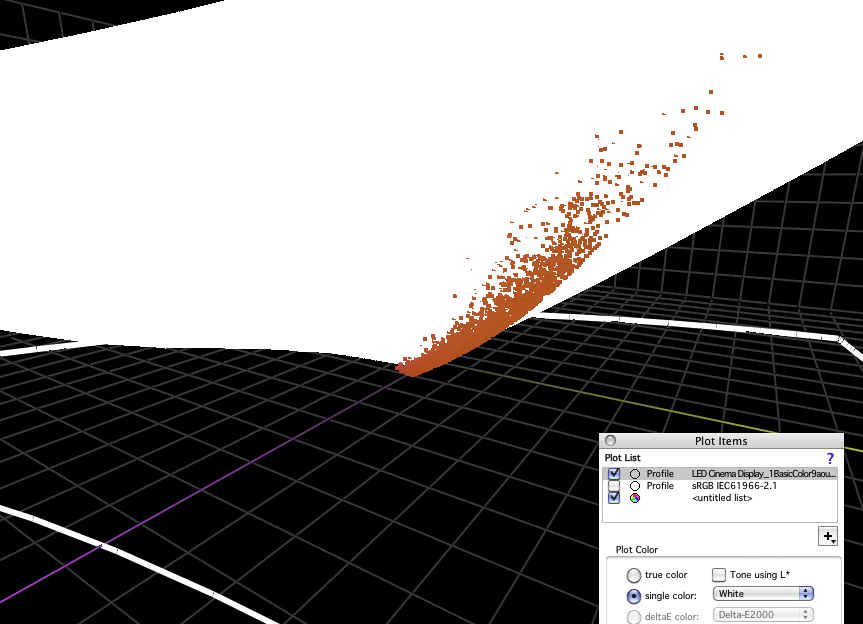 Patrick , you helping me big time…

My only source prior your help was this article and maybe Discus gonna be my last resort…
And to explain the problem you asked … I don’t have printing issue , the trouble come from web publisher telling me that my “sent picture” are not the color it should be… (and on my monitor ,those color are just fine…)
Like a feathery hat showing vibrant red on my screen and seem orange-red on theirs (theirs are for sure well calibrated and all…)
thank you again…

Just Came across a product called iColor Display 3.7.3 Made by Quato…

This Software have a feature called “Correction for Wide-Gamut-Display” and Apple LED Cinema Display is an available choice !..

They also have the DTP94 as available colorimeter…
My Questions…

Thank… i learn a lot with your help…

If you’re trying to save a bit of money, you’d be much better off if you purchase a new colorimeter rather than new software. As far as SW is concerned, a very decent app which is free is dispcalGUI, which is a GUI for Argyll. And most devices will have some sort of profiling app in the box anyway, it is quite rare to purchase just the colorimeter these days.

The Quato app is a fine profiling application, but is (obviously) made specifically for Quato screens & the options their screens support. Although it says it supports your Apple screen, most any profiling app will support it. I’d be extremely surprised if it were even possible to purchase a current profiling app which claimed it did not support the Apple screen.

The main problem IMHO is your old DTP94. Even if it were brand-new & purchased today, it would still be a well over 5 year old design & manufactured probably near 4+ years ago. In that time the colour filters would have become somewhat more opaque & the circuits & technology for the sensors is so much older & further behind what is available today.

Regarding the ‘correction feature’, just about every current app has the same sort of correction table for slightly older colorimeters. You would be far better served by a new/current colorimeter because the DTP94 is now so old that even with a correction table, the filters inside the device were made specifically for the type of screens & backlights that were around a long time ago (in PC terms, 5 years is about the equivalent of 15-20 years because everything advances so quickly).

Have a look at dispcalGUI & it has an incredible array of options, settings, advanced features & it’s all free. It too has the same correction tables & people can even contribute their own correction tables. And no, I don’t use it for profiling, I use Eizo ColorNavigator to calibrate & profile my screen but I occasionally use dispcalGUI for testing.

Just a bit of food for thought…

Just ordered Spyder Elite This morning…
Anyone advice on the Datacolor (included Software) ?

Thanks both of you guys

Just wondering what were the main factors influencing your choice when you made your purchase? I’m sure you will get much better results than you did with the DTP94 (at least I hope you will

I’ve never used any of Datacolor’s software, so can’t help you there (I do know it’s getting a little long in the tooth now, not sure how often they have complete version updates) but I would definitely suggest having another look at BasICColor Display Pro 4 as it has a 15 day free trial & many more options/settings than the Datacolor software. Or try dispcalGUI & get lost for days just trying to figure out what all the settings actually do (although there is highly detailed help documentation to explain it all).

Report back & let us know how you go & if there is any improvement.
Good luck!

forums like this one , Pat and other from other forums… Tends to point toward Spyder 3 for wide gamut display…
And this review nail the coffin for good:
“For standard colorimeters, the best wide-gamut choice appears to be the Datacolor Spyder 3. The DTP-94 is inaccurate measuring wide-gamut displays while the stock Eye-One Display exhibits such high variability that any single sensor cannot be relied on. This advice applies to users with critical color matching needs; if your business does not depend upon it, any colorimeter is a vast improvement over none at all.”

I sure let you guy know how it went … Many thanks to both of you.
Dany

The Spyder 3 should provide excellent results.