Ideas for targets too large for product?

We are embarking on our own G7 adventure here and have been halted at step one:

The P2P25X target does not fit on our product.

You can imagine the difficulties this might cause down the line… Are there any accomodations for targets that must be broken up into multiple smaller targets?

We need the target (or rather the patches on the target) to fit on a 116mm circle with a 19mm hole in the middle. (Sounds suspiciously like a CD/DVD or Blu-ray disc, doesn’t it?!)

Thanks in advance for any ideas you have. I’m currently in the process of chopping the target up in Photoshop and trying to make it fit on two discs. (without resizing).

Hi Brian,
Takes me back to about 1995/96 doing a stochastic/FM calibration at a CD printing plant in Sydney.

My suggestion is that as you are putting down a white ‘undercoat’ print on to a substitute ‘flat’ surface and take readings from there.

For a simple control print a mono step wedge on disc and then on substitute substrate and compare percentages.

You will most likely be absolutely knocking on the door of a great result going down this path.

It may be possible to make a custom P2P to fit onto a single CD using BasICColor Catch, which allows null patches to be defined. To see an example, download the demo and and look at the “Measurement guide for the EyeOne iO.pdf” for measuring the WAN-IFRA Cuboid target. wan-ifra.org/system/files/fi … d_2010.zip

This may be more trouble than it’s worth but seems doable. I bet the good folks at Chromix would be willing to give you a quote for making this happen.

mattLouis, thank you for the tip on that software. It’s a little over my head at the moment but I’m digging through the manual now. What I gather is that you’re suggesting I create a “pattern” for a measurement automation device (We use the iO with the i1 for measurement automation) that plots the points for each patch and this particular piece of software allows you to define empty patches where no measurement will be taken?

Bondi_dan, thanks for the feedback; unfortunately our machinery will not accomodate ANY flat surface other than a disc. It would be akin to modifying a sheetfed press to take webs!

If I come up with anything I can share in this community, I will do so. (Unless I end up paying Chromix for it!)

Yes that’s the idea. If your process is stable then it would be easier of course to use your current method and spot read with the i1. If you’ll be taking lots of readings quite often then it may be worth the configuration effort.

Me to! That link you provided has a photo of exactly what I’m after. Does Chromix offer any products that would allow me to use the iO and the i1 to measure a P2P25 on a CD?

If I can shorten this development time, I’ll have more time for Ink development, if necessary.

I’ve decided to continue in this thead rather than starting others; if there is a better place for this than here, please feel free to move it. It will eventually get to Curve 2 questions, I’m sure!

So I’ve created the target(s) for P2P25X on two discs. (see below) I could go with these and just manually read all 300 patches but I would really like to use my iOi1 to do that.

I’m digging into the “P2P25X Eye-One iO.xml” file to see how these XML instructions translate into readings; it seems somewhat self-explanatory, but I have a few questions:

Is a 6mm patch too small for the i1? I think the aperature is 5mm but I’m concerned about the accuracy of the iO. (I have very little experience with it)

It appears the measurements are in millimeters?

If I duplicate the markings (outside the patches) exactly, will the iOi1 be happy with positioning, etc?

I know these are not normal questions and quite outside the norm of what the community here usually deals with. Any help is appreciated.

The i1Pro apertures is a little less than 5 mm. 6 mm is the minimum that most software packages will allow you to go down to for an i1Pro, so you are still in the realm of okay. The robotics on the IO are pretty good, but you’ve chosen a pretty small margin of error. It might be best if you measure your targets several times and compare or average your measurements to see if they come out pretty similar or are all over the place.

Measurements in the P2P target reference files are in millimeters.

If you can figure out where to put the 3 corners for positioning, the IO should happily measure away whatever is underneath it. How are you going to deal with the different heights of the CD & the table it’s sitting on? The IO expects to be measuring at the surface of the material. You don’t want it catching on an edge or bouncing around.

Thanks for the reply, Patrick!

The i1Pro apertures is a little less than 5 mm…

I decided not to risk it and increased the size of the patches to 7mm. It’s using a little more of the print surface than I would like, but it will do.

Measurements in the P2P target reference files are in millimeters.

I’m wondering, then, how the basePageDescription measurements are derived. They don’t seem to correspond to the .tif file at all. Perhaps they’re irrelevant in the context I’m condsidering.

If you can figure out where to put the 3 corners for positioning, the IO should happily measure away whatever is underneath it.

Ah. Here’s where my knowledge of this automation is clearly falling short… My assumption was that the .xml file described where on the bed the target should lie, but what you’re describing implies that the target could be placed anywhere on the bed and there’s a “homing” procedure that tells the robitics where “home” is.

How are you going to deal with the different heights of the CD & the table it’s sitting on? The IO expects to be measuring at the surface of the material. You don’t want it catching on an edge or bouncing around.

That one I’ve got figured out!

I’ve made a “template” out of thick plastic in which I’ve cut two holes. Luckily the iO has provisions for setting the stock thickness and the 1.2mm thickness of our disc (and the template) is well within that range. The idea is that we print the two discs, put them in this template and send the iO measuring away!

Here’s the general idea of what I’m trying to accomplish; I’m a visual kind of guy so maybe this will help those who are as lost about this as I am about the iO!

The P2P25X file has been split on to two discs: 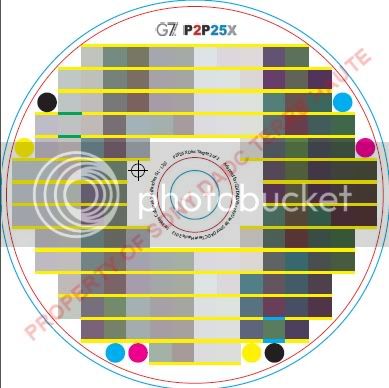 I then created this template (not knowing what features of the original image aided the iO in locating the patches, I duplicated all of them I could):

The idea is that I would print the two discs on the same press, no adjustment, back to back in one “session” and then place them in this template on the iO bed. (It would look something like this):

(Sorry for the hideous watermarks… legal considerations and all that.)

With the right software (or butchering of the .xml file) I would measure all the squares, creating a very messy .cie file. (Assuming I use basICColor Catch for this task)

I’m a programmer by trade so the process of turning 528 patches into the 300 that are actually used in the P2P25X is actually the easy part! Finally, then, I will have the files required to use in the Curve 2 software.

Don’t you hate it when people reply to their own posts all the time?

So I’ve had some success with this target method; I was concerned that the MeasureTool from XRite (part of the ProfileMaker Pro package) wouldn’t measure custom targets but thankfully that concern was unfounded… I was able, with my Mac, to create a 594 patch TXT file that I will now distill down to the correct number/arrangement of patches to match the P2P25X.

I’m a programmer by trade so this will be trivial; at that point, I will be dumping these files into Curve 2 and beginning my adventure!

P.S. I LOVE the i1iO combo. So versatile and saves my bacon measuring these huge targets!